How Polteq continues to develop

Specialist in software testing Polteq may be twenty years old, but it has continuously developed. Over the past five years, the company has acquired a wealth of knowledge in the areas of IOT, AI and Business Intelligence. And now it also specialises in AI testing. That is why Polteq fits so well into hub Twinning, the place to grow in Data Science, AI and Blockchain. And interesting as a colocation for innovative companies.

In this interview, the founders of Polteq, Martin Pol and Marjolein Steyerberg, have the floor. Because twenty years is a good time to reflect on them.

By Martin Pol and Marjolein Steyerberg

The idea of starting Polteq was born more than 20 years ago in Helsinki, where we carried out an assignment at Nokia at the time. The first business plan was written on the back of copies from a travel guide about Finland. The goal we had in mind at the time was: our own testing company, which stands out for its high quality of service, with experienced test consultants and test managers. It was from this vision that Polteq was founded in July 2000.

Polteq's first client was Barclays Bank in England and Polteq's services at the time were described as 'Test Process Architect', in fact the organisation and improvement of (structured) testing. At the end of 2000, more employees joined Polteq and this is how Polteq's growth began. In 2001, we moved into our first office in Amersfoort.

The decision at the end of 2004 to expand Polteq's services to include test engineering and test coordination in addition to consultancy and training turned out to be a good move in line with customers' needs. The next phase was the opening of offices in Groningen, Dordrecht and Amsterdam in order to have a local presence for clients and employees. This growth led to Polteq winning the FD Gazellen Award in 2008 for the fastest growing small company in the province of Utrecht. In the following years, Polteq continued to grow successfully and subsequently opened branches in Leuven, Deventer and Eindhoven. And now, in 2020, Polteq has excellent geographical coverage with seven local branches.

In addition to offering a high level of knowledge and broad experience, the innovative character of its services is of paramount importance. In this way, we can optimally support our clients in the development of high-quality software and achieve even higher returns during and after the development process. For example, over the past 20 years Polteq has devised solutions for test issues in the field of online banking, outsourcing of tests, E2E testing, mobile apps/api testing, performance and security testing, AI testing and testing within Agile/DevOps. Related training and certification programmes have also been developed for this purpose. And the role of 'Test Process Architect' runs as a common thread through all innovations, because in addition to approaches such as TPI/SPI and TMMI, Polteq has developed its own approaches for improving (structured) tests such as TI4Agile, TI4Automation, TI4Mobile and Context Driven Test Improvement.

With our own R&D, we will continue to follow developments in the market with great curiosity in the coming years. This will enable us to continue to develop solutions, services and training in order to modernise the testing process at our customers and support it at the highest possible level.

We are proud that over the past 20 years we have grown into one of the largest specialised providers of testing services in the Netherlands and Belgium. The informal character and personal approach have been an important element in our business operations from the start, not only towards our own employees, but also in our interaction with clients. We would like to thank our colleagues and our business relations for their trust and pleasant cooperation. Full of ambition, we look forward to the next 20 years! 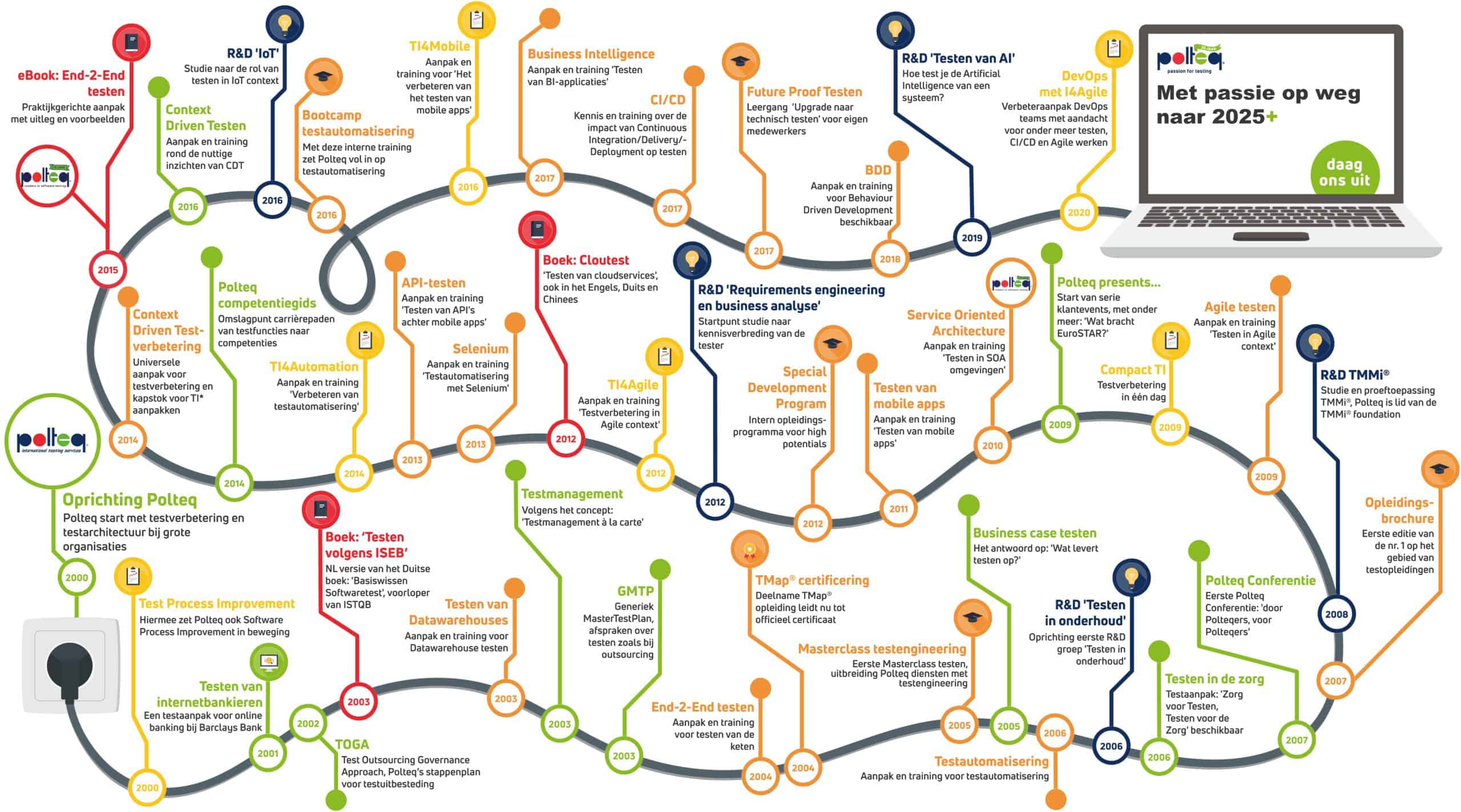