In this week's AD an article by Martijn Cox, CTO and co-founder of Xeltis, located in hub Catalyst on the TU / e campus. A bypass to remove the heart without having to remove a vein from the leg? It is possible with an alternative made of soluble plastic. At least, according to Xeltis in Eindhoven. That company had previously successfully implanted heart valves made of the same material in children. The potential is enormous, according to Martijn.

The "artificial veins" are in fact plastic tubes or tubing, which, like the previously developed heart valves, are porous. “Cell material from the patient can settle in the holes. This ensures that new tissue is created, ”says Martijn Cox, co-founder of Xeltis. “Our material is a kind of 'temporary home' that eventually disappears. The end result is a body's own blood vessel. ”

The company, with approximately thirty employees, - located in hub Catalyst on the Tu / e campus in Eindhoven - hopes to be able to test the "arteries" on a small scale in humans this year. Previously, it has been successfully tested in animals. This showed, among other things, that the pores of the tubes were filled with body tissue within a year.

According to Cox, the plastic blood vessels can ensure that bypass surgery no longer has to use a blood vessel from the patient's leg to create a new vascular connection around the heart. “That is often very stressful for the patient. It concerns a blood vessel up to 80 centimeters. ” The potential of the Eindhoven discovery is enormous, he says. Bypass surgery is the most frequently performed of all open heart surgeries. "And the current working method can simply be better."

In addition, the innovation of Xeltis could also offer a solution for dialysis patients, according to Cox. “In order to be able to dialyze, a connection is often made between an artery and a vein. We hope that our technology can also reduce the burden on the patient. " 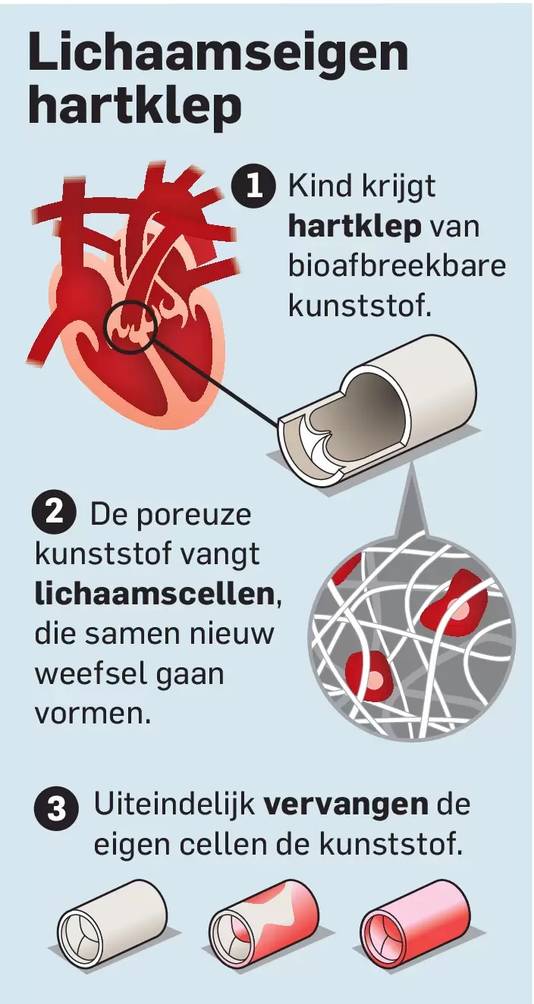 Xeltis has been in the news several times in recent years with his heart valves. Eighteen children - born with a heart defect - had one before, during previous clinical studies. The "dissolvable" valves are an alternative to existing variants of, for example, metal or animal material. Because they are not natural, they cause reactions of the immune system and often require medication. "In some cases you also see that after a short time a new procedure and implantation is needed," says Cox. "Especially with young patients who are growing."

The next step with the Eindhoven heart valves is more extensive research. To this end, they have already joined forces with more than ten hospitals in Europe and the United States. The intention is to start a larger study with the new heart valve in 2021. Participating physicians themselves approach patients, asking them whether they would like to opt for the experimental treatment.

"The procedure itself is no different than when you get a heart valve made of metal or animal material," says Cox, who does allow for some delay in the trial now that regular healthcare is under pressure as a result of the corona virus. "If the results of this new study are good, we expect to receive approval for a wider rollout in Europe and the United States by 2023 at the earliest."